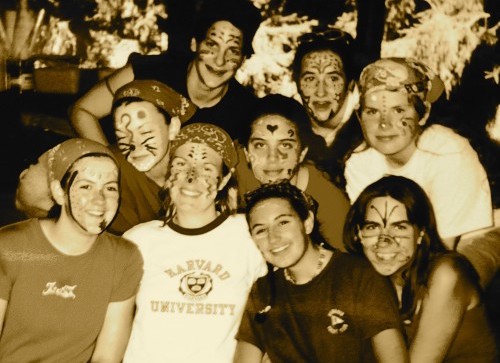 Stuffed animals kidnapped and ransomed for candy. Beds suspended over pools, and cooks tied to flagpoles. Frozen bra or panty “cakes” happened on counselor and CIT birthdays. Ladies with summer birthdays kept a strict count of their underwear if they didn’t want to be presented with frozen undergarments coated with frosting. Maybe the pranks weren’t our best moments, but there is something to be said for teaching girls to have a healthy naughty streak.

There were scavenger hunts a plenty. Two counselors pulled up in a pick up truck one year and attempted to win the scavenger hunt with the junk in the trunk. I recall one of them trying extra hard to convince the judges that the truck battery was a purse.

There was stargazing with oodles of shooting stars. There were hunts for dragon’s teeth in the Camp Tweedale reservoir–these black stones that formed in perfect black cubes. There were hikes and sunrise canoe trips and sunset swims in the pool.

I rode a horse for the first time at Camp Tohikanee. Well, technically he was a pony–a big fat pony named Coca Cola whose sole interest seemed to be inhaling grass. That was the week I learned horseriding was not for me. I managed to get bit, stepped on, and kicked in a few short days. Fortunately, the kick was just a graze to the thigh.

Like many people who want a good thing in their life to live on, I really want girls in the future to have the same opportunities I did. With family and school constantly demanding you be a “good girl”, it’s easy to be trapped by perfectionism and forget that life is all about discovering and celebrating who you are. Girls deserve a chance to get away from their usual lives and discover themselves.

I understand the camps were losing business. Yet the more I read about changes that have been made to the Girl Scouts, the more I wonder if those changes are not so much about the tastes of modern young girls as they are about adults trying to cover their butts. An ugly debt boil has burst after years of poor financial management. Some folks are convinced girl scout cookie sales will go towards paying off that debt rather than scholarships and camp maintenance. Even a Congressman from Iowa has expressed concern about GSUSA’s administrative costs. As forward thinking as the leadership is when it comes to social issues, their business decisions have formed a huge rift between them and the troops they serve.

I ‘m disappointed more effort wasn’t made to save the camps. When I was growing up, these camps were much more affordable than other overnight camps. They offered outdoor opportunities to families who couldn’t afford to ship their girls off to camp for a whole summer. Perhaps the Girl Scouts were too giving by keeping their camp prices so low. But increasing access to camping and wholesome activities is their mission, a part of what the Girl Scouts promise their members.

That promise meant a lot to me growing up GSUSA. I’m sad you can’t afford to make that same promise to girls in future generations.