Spock: A Hero Without Emotion 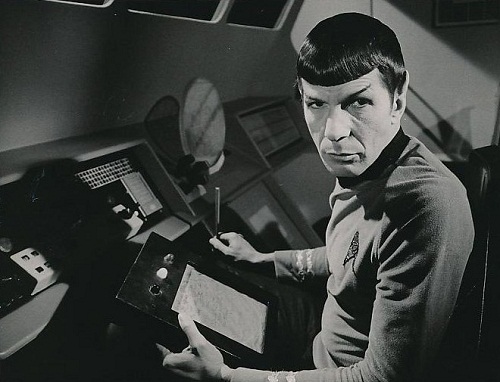 Leonard Nimoy spent a good chunk of his acting career hating Spock. For an actor, I can see why being typecast as Spock would be frustrating. Why would any actor want to play a character with no emotions? From an actor’s point of view, Spock was a dry psychopath who had a few good quips. I can see how that would get boring.

Yet Spock broke boundaries. Here was this character who, despite his lack of emotional intelligence, wasn’t a mad scientist or a mass murderer or any of the other stereotypes Hollywood shoved introverts into back in the 1960s. He was a hero.

I have no doubt Spock inspired scores of people who identified with him. People who embrace logic because emotion is this nebulous thing that everyone else in the world seems to understand intuitively, but they can’t wrap their heads around it. Emotion is an enigma they can’t crack, and rather than trying to help you, society slaps the “freak” label on you and moves on.

Then there are the people whose emotions are so intense, they disconnect themselves from their feelings to protect themselves and the people they care about. But the people they care about don’t get it. They don’t understand why you can’t react with feeling the same way everyone else does. But like the Vulcans of Star Trek, you know your true emotions would be absolutely terrifying to others. Logic and introversion are your refuges.

I fall into the latter category. What people interpret as coldness, aloofness, or even arrogance in me is a finely honed disconnection from the storm of emotions inside. I often react without feeling to emotional situations because the alternative would be a maelstrom.

Spock showed me, and others like me, that it’s possible for people like us to lead successful and fulfilling lives. He was just as valuable to the Enterprise as the emotional and impulsive Captain Kirk was. The fact they were best friends despite their opposing personalities was even more heartening. Spock was loved by others even though he couldn’t return their love in a way they would necessarily understand or appreciate. Seeing that gave hope to people like me who are outliers on the spectrum of human emotional experience.

No actor aspires to play an emotionally challenged introvert on television. Spock could have easily become a farce, another “weird” scientist inserted into the plot to provide exposition and laughs at his expense. Instead, Nimoy shaped Spock into a character who commanded respect. He showed the world that gravitas, ingenuity, and bravery weren’t exclusive to emotional extroverts.

Mr. Nimoy, Spock meant a lot to me. Even though he might not have been the legacy you envisioned for yourself, I’m glad you shaped him into the cultural icon he is today. You lived long, you prospered, and us real-life Vulcans who identified with this cerebral character prospered along with you.