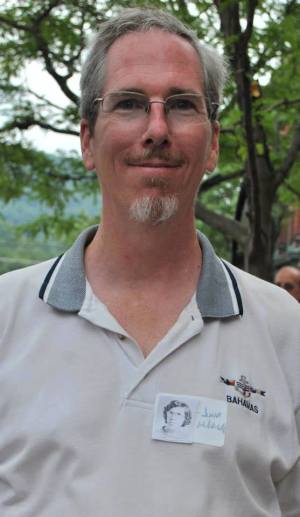 Yesterday, the world became a little less bright. Yet I hardly noticed because John Madigan left so much light behind.

John died after leaving for more than a year with glioblastoma—a cancer so vicious most oncologists will estimate your remaining lifespan in months rather than years.

You could chalk up John’s longevity to incredible luck, modern medicine, or even incredible genetics, yet I like to think there was more to him than an optimal assortment of biochemicals. He had a passion for helping others and for sharing love with others.

Much of this help came in the form of John’s “psychic” healing abilities. Maybe they aren’t real. Perhaps they were all in his mind and the mind of his “patients.” But if science has demonstrated anything, it’s that our minds can have an incredibly powerful influence on our bodies. Even if all John was doing was thinking positive thoughts, it made one hell of a difference to him and all of the people around him.

I first met John and Candy Madigan when I was freelancing in College Park, Maryland. I was starting to lose my social skills from being in the damn house all the time and I looked up some clubs on MeetUp.com. The Washington Science Fiction Association was an intuitive choice.

I remember thinking how weird it was for a person to have listed their home address AND their telephone number on the Internet. I thought it was even weirder that their instructions were for me to enter their house WITHOUT knocking. Also, the warning that the change on the floor was supposed to be there. Bizarre.

Yet when I entered their house, I instantly knew love was abundant in this home. The smell of cookies baking immediately eased my mind, as did the presence of pets and a massive collection of books. I knew immediately, these were my type of people.

John did his utmost to make new members feel welcome in the club, and I always enjoyed the dinners he organized and the stories he would tell. He never skimped on hugs, and he would give back rubs to anyone who would ask.

His relationship with his wife Candy is inspiring. I would say “was,” but I honestly think they will continue to epitomize the ideal marriage for the rest of my life. They could be real with each other in way that few couples ever achieve. They rode the waves of life through romantic highs and frustrating lows holding hands the whole way. They didn’t have to hide their emotions from each other, or pretend to be something they were not.

I think it’s fair to say the Madigan’s aren’t a rich or ambitious family, but they cultivated bonds much stronger than families I have seen with two or even ten times the resources. I believe that is the main reason so many people feel at home in their house and in their company.

Including me. There are few places I have ever felt as welcome than in the Madigan home.

It won’t be the same without John around to crack his usual jokes, to make his silly observations, or to build the fire for winter WSFA meetings. Yet, I doubt he will ever truly leave that house. Not just because he made a solemn promise to Candy before he died that he would haunt her, but that I will always think of him when I enter that house. Or when I go to a science fiction convention. Or when I finally get around to making my own batch of WSFA cookies.

My entrance into the world of fan conventions would have never happened without John Madigan welcoming me into it. I doubt I would be making this post from Illogicon today if he didn’t bring WSFA to MeetUp. For that, I am immensely grateful.

Take it easy John. And if you choose to attend WSFA meetings as a ghost, perhaps you could use the Crystal Pepsi as a host.