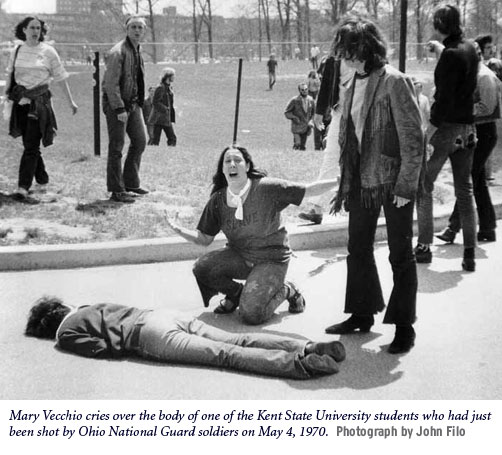 When I see the photographs coming out of Ferguson, MI, this picture of Mary Vecchio mourning the death of her classmate in 1970 comes to mind. For those unfamiliar with the events leading to the shootings at Kent State, you can get the gist of it all here. Pretty much it was a case study in tragedy arising from an overzealous police force mixed with a mob of very unhappy people.

I feel as though the protests in Ferguson won’t end until another tragedy strikes. The police force in Ferguson may be using non-lethal crowd control techniques. Yet tear gas and flash bangs can still harm people. Rubber bullets are still bullets. They might not kill, but they can injure and maim. These non-lethal tactics aren’t non-violent.

I know the police have the interests of property owners to consider and their own safety is a priority. Yet I wonder whether our authorities have truly learned their lessons from Kent State and other protests since then. Or if they have set themselves up to repeat mistakes with tragic consequences with their eagerness to deploy heavy artillery.

Given the current state of our economy and the disparate amount of power being held by so few with so much money, these protests are unlikely to go away anytime soon. I hope as more people take to the street to demand change from our authorities that they remember the pain our nation felt after Kent State and say, never again.