When I go on vacation, I tend to thoroughly clean my apartment before I leave. Because I know when I get home, vacation stuff will erupt from my suitcase and it will take me at least a week to get all the bits and pieces back to where they belong. As of this writing, my suitcase is still on the living room floor, reminding me there are some clean clothes in it I should consider wearing this week.

It has also reminded me there are many marvelous things about Asheville I have yet to convey on this blog. So here they are.

Sex In A Cup 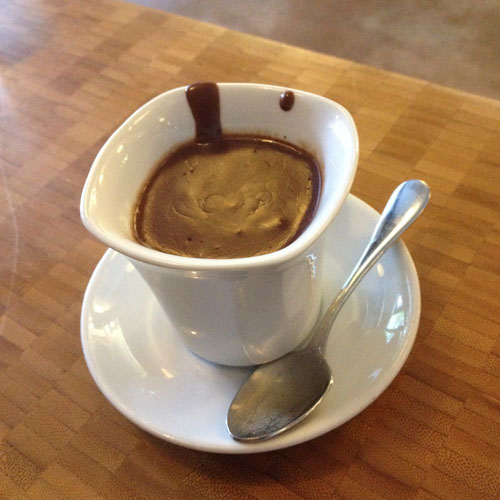 Folks, pictured above is a cup of liquid sex.

I kid you not. Thank God they don’t make this stuff in Carrboro because I would never date again.

I’m not gushing about any mere cup of hot chocolate here folks. This is the Liquid Truffle, the signature beverage of the French Broad Chocolate Lounge. You choose your favorite type of chocolate and they melt it together with creme and half-n-half to create this climax-inducing cup of amazing.

I went there every day.

Asheville is a great base for day trips into the Blue Ridge mountains, especially if you’re a waterfall junkie like me. The drives aren’t short, but if the weather is nice, you can take the Parkway and be treated to scenic views along the way. Views like this. 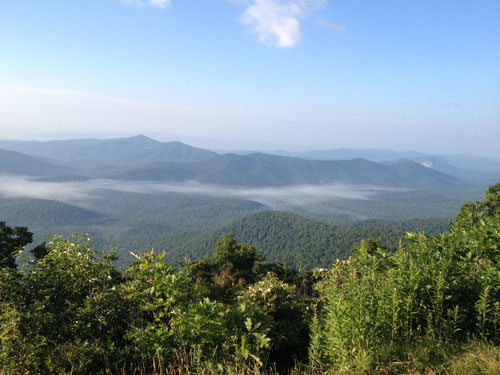 I spent one day in the mountains southeast of Asheville to appreciate the many gorgeous waterfalls one can find near Brevard, NC. Of all the ones I saw, I feel my favorite was probably High Falls in DuPont State Forest. The state forest tends to be a little more lax about people swimming in the rivers than the National Park Service, so it was hard to get pictures without people in them. It was nice to take a dip and cool off though without worrying about a ranger scolding you. 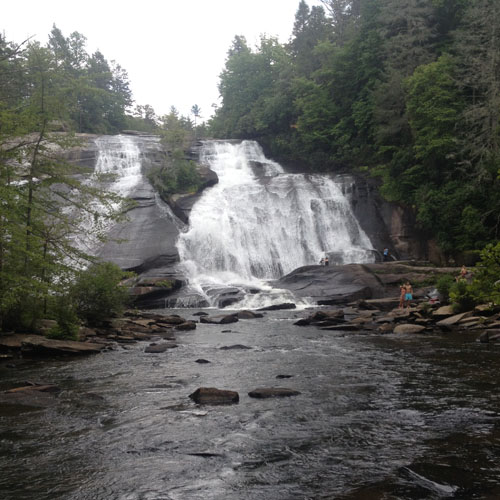 I also took the obligatory tumble down Sliding Rock, a big ol’ rock with enough water running over it to create a natural waterslide. Heed the warnings about wearing denim shorts over your bathing suit. I saw a teenager get a long, but fortunately not deep, cut on her butt. Watershoes were handy too. No matter what you do though, the water will be COLD.

Another day, I headed north to Linville Falls. One of the most beautiful and unique waterfalls I have ever seen in my life. I kind of wish I chose to hike down to the plunge pool. Darn, I guess I’ll just have to go back. Instead, I chose to see Cascade Falls. Totally worth the hike. 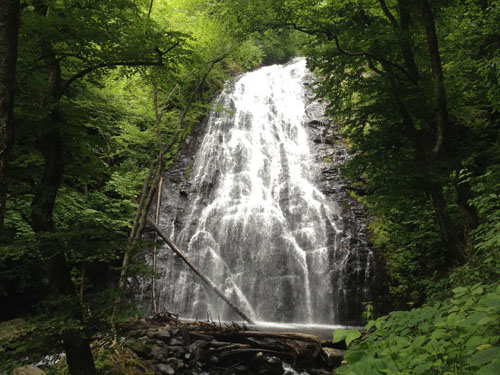 You can drink your way across Asheville. The city is one giant pub crawl. Aside from a grocery store, bad beer is nowhere to be found. Some of the dive bars carry PBR, but serving Bud Light in Asheville is a mark of shame. Especially now that Asheville has the most breweries per capita in the entire country. Swallow that Colorado.

I tried some weird beer flavors: watermelon, cucumber, jalapeno. The jalapeno beer was the only one I truly couldn’t finish. The near-acidic combination of hops and capsaicin was too much for me. As a hophead through and through, it was no surprise Wicked Weed was my brewery of choice.

Whilst consuming beer, I also checked out the local comedy offerings. The Disclaimer Standup Lounge holds a Wicked Awesome open mic on Wednesday nights. The starting time is somewhat late, but it drew a decent crowd that wasn’t just other comics. They had a band! They would play random musical interludes in between comics. I love how the band grew from one guitar player to a full ensemble complete with clarinet and percussion as the night went on. Also, this dude on the accordion became a running gag. 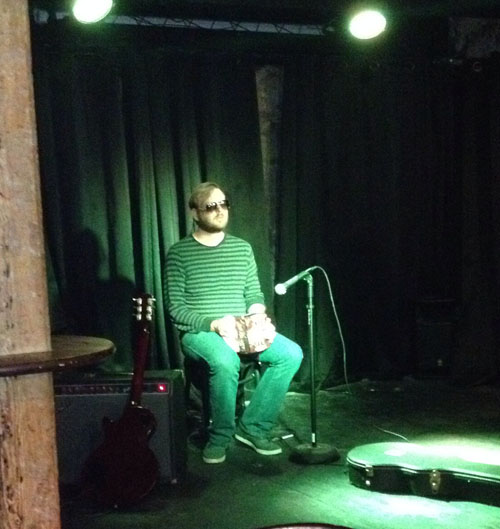 He sat there like one of the soldiers from the Queen’s Guard, never moving other than to perform his official accordion-playing duties. There was a contest of sorts going on between the comics to see which one of us could make him crack a smile. Alas, he was in the bathroom when it was my turn.

The Asheville audience loved my set. Between jokes about hiking and gender-bending, it was no surprise this material was a hippy hit.

Reading in the Clouds

I sprained my ankle pretty bad on a hike to Upper Falls (which wasn’t really worth the hike, FYI), so I had to chose some less-strenous activities for the rest of my vacation. One was to drive to the top of Mount Mitchell, the tallest mountain east of the Mississippi River. What I saw was this. 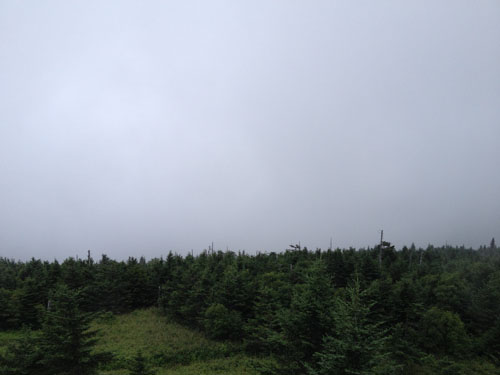 Yep. Lots of clouds. They were moving around, so there was a promise of getting somewhat of a decent view. So I pulled out a book and parked myself on a bench. Over the next hour, I enjoyed a few chapters of Mur Lafferty’s Ghost Train to New Orleans, pausing every once and a while to swat the boll weevils off my clothes. I don’t know what the summit is overrun with them. As far as I know, there’s nothing for them to eat on the benches. Eventually, the cloud cover lifted enough for me to see some of the surrounding valleys. 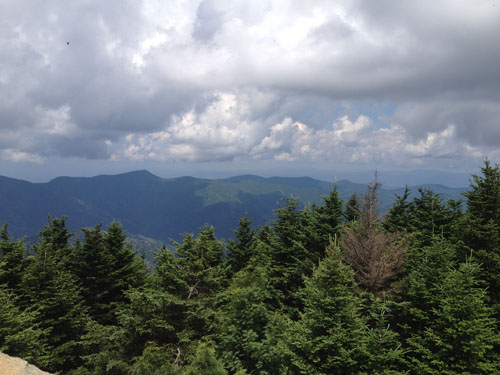 I include this last bit as a warning to anyone who owns a modern car with plastic bits attached to them. Wire is handy to have because if those plastic parts get snagged on anything (say a rock in a poorly built parking lot), they’ll snap off in an instant and you’ll never be able to find the absurdly miniature plastic push pins used to hold them to your car. I guarantee it.

I learned this lesson after I got the bumper cover of my dad’s car hooked on a mailbox and watched in horror as it flew across the yard. Ever since, I’ve made sure to carry some wire in my car kit. You don’t have to buy anything special. I just kept the wire from an old spiral-bound notebook I was recycling. Worked just fine to tie my bumper cover back into place after that godforsaken rock tore it clean off the front of my Honda Fit. Eventually, I’ll replace it with some more of those stupid-ass plastic pins.

To end on a high note, I’ll say Asheville is a true gem of North Carolina. Should you ever visit my fine state, I highly recommend you check it out. I’ll be going back for sure when I can no longer resist the call of the mountains and the mist. 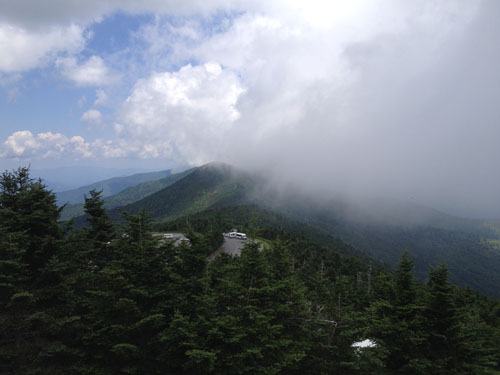