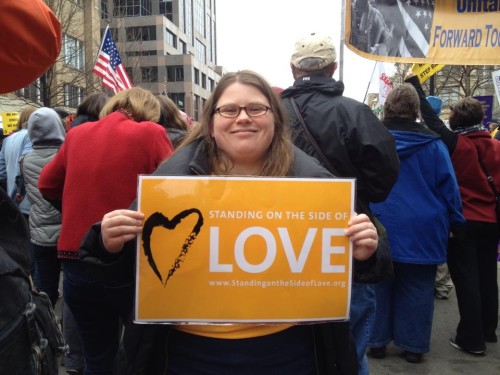 Ugh. I’m sick. I felt it coming on before the Moral March on Saturday, but I wasn’t about to miss that. It was actually a fairly warm day and it didn’t rain like every weatherman in the area was predicting. (Bet the conspiracy theorists are already claiming that McCrory tried to buy off the news stations.) So I can’t blame the weather for my illness.

But I can be pissed at my sinuses.

Ever since I was little they have had a penchant for inviting bacteria over to play. Bacteria are horrible house guests. They eat everything in sight, bring more friends with them than your body can handle, and leave a huge mess behind for your immune system to clean up.

I’m crossing my fingers that this will be one of the sinus infections that clears up on its own. For me, it’s always about a fifty fifty chance.

Now that I’ve given you more information about my body’s quirks than you ever wanted to know, here are a few things about the march.

It was great. The local news coverage hasn’t really been entirely fair about what the march was all about. I can understand that certain outlets are attempting to maintain a semblance of neutrality. But downsizing the march as if it were just another Moral Monday gathering doesn’t give readers an accurate portrait. The city blocks were packed in all directions. The only time I’ve seen more people packed into a city was during Jon Stewart and Stephen Colbert’s rally in Washington, DC. So the NAACP’s estimate of 80-100K is probably not far off the mark.

There were people traveling from as far away as Maine or Miami, Florida. Folks from all across the east coast came to support those of us in North Carolina who believe that our government needs to reassess it’s sense of public morality. Their presence also reinforced the idea that this movement isn’t just about North Carolina. It’s about the direction we are choosing as a nation.

If relatively recent history tells us anything, our public policies swing back and forth like a pendulum. In the roaring twenties, they swung towards industry and the upper classes. After the Great Depression, they swung towards labor rights and the people. That swing peaked in the 1970s and since then, our politics have increasingly favored the well-to-do again.

Now it’s time to make the government work for the people once more. This movement is about reminding our politicians that they should be serving the best interests of the poor and the working class too. Lifting up the poorest among us will only make our society better. It is our moral duty to do so.

It’s time for the pendulum to swing back.