The Best Antidote For A Bad Dream: A Cat Between Your Legs

I fell asleep on my couch, and unlike some people (meaning YOU crazy, couch-loving Worsham sisters), I don’t sleep particularly well on couches.

Last night’s couch sleeping brought on a dream of travel to Europe, which would have been a great dream except I missed my connecting flight AND I forgot to pack my underwear.

A security guard felt the lack of underwear in my bag was suspicious and pulled me out of line for questioning. So I was stuck in some random German airport, trying to convince a guard whose English sucked that a lack of underwear wasn’t sufficient grounds to accuse someone of being a terrorist.

As illogical as it was to be labeled as suspicious due to a lack of undergarments, my dream self was very distressed by the whole mess. I woke up agitated and was ready to pen a nasty letter to the Chancellor of Germany.

I also woke up to this: 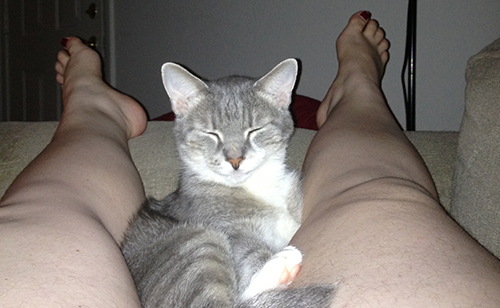 I don’t like using the flash on my phone camera, but the cuteness would have been wrecked if I had to get up and switch on the lights. Plus, his squinting makes the picture even cuter.

I forgot about the letter pretty quick, and eventually I picked up the cat and went to sleep in my real bed. There were no more dreams about Europe or crazed security guards.

Still, if you’re planning on travelling to Europe any time soon, double check that you have underwear packed in your bag.