You know those weeks in which you barely have time to breathe? Ones in which you’re just so busy that one blink will carry you from your office on a college campus to a stage in front of a packed audience singing the most mangled opera you ever sung in your life?

Perhaps most people don’t experience that when their lives are flying by, but most people don’t perform live in an Improv show the same week as they are in the production stage of a major work project, helping the boss prepare for a visit from the big boss, and managing a cat having toilet issues.

I’m sure y’all are most interested in the cat, so what I have to say on that is that he’s probably going to be fine. I had a vet visit scheduled for Saturday anyway because both of my kitties need updated FLV shots. But now Disco will get a workup for his toilet troubles too. He likely has an infection in his urinary tract or one of his butt glands, which are pretty common in male cats, but I plan to fork over $40 to get his pee tested anyway. Because if he’s getting stones again, then I’m probably going to have to give in to buying the expensive vet food. It’s ultimately a cheaper option than surgery, but considering how common these issues are in male cats, you think someone would have figured out a way to bring the price down.

That’s enough about the cat. Back to me.

The Improv show was a lot of fun. I felt fairly good on stage. I don’t think it was my best performance, yet I’ve down all of two shows now. I have managed to incorporate falling on my ass on purpose into both performances. Apparently this is my thing now.

I’m planning to sign up for Improv 301, which means I’ll be eligible to audition to be a part of the company. I’m not sure that’s what I want yet. It’s not an insignificant time commitment. But it couldn’t hurt to audition and see what happens.

What else is new? Oh, work is work. Exercise is exercise. Writing is writing. Oh and I MIGHT FINISH THE FIRST DRAFT OF MY NOVEL THIS WEEKEND!!!

Guess that’s pretty big news. I’m working on the last chapter right now. Some heavy editing will be needed to make it submission-ready, but I tend to like the rewriting phases of projects more than the first draft. Because when I add words to an empty page, they never seem as brilliant or witty as the words in my head. When I’m revising, that’s the point in which I remember that sometimes there is brilliance in those words, you just got to shuffle them around until it shows.

I will write about my final verdict on the high school reunion. I swear. You might even see a cute baby picture instead of a cute cat picture. Speaking of cute cat pictures, here. Have one more.

And if anyone is scandalized by the bra in the background, my defense is that it was laundry day. So get over it. 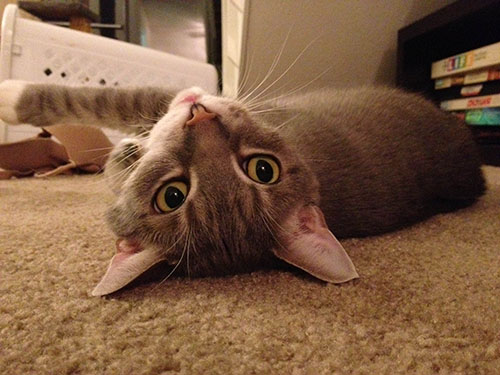