First Comic Con Ever, and Not the Last By Far 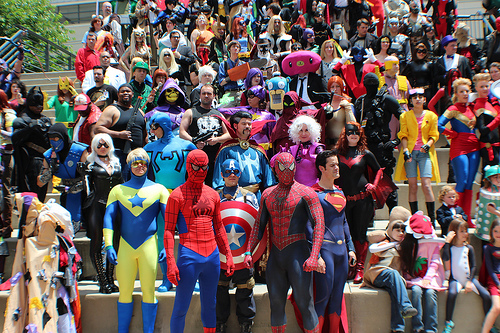 I went to Heroes Con on Saturday, and while I have been to many literary science fiction/fantasy cons, this is the first time I ever went to a comic convention. And dang, did I ever have a culture shock.

As in I was shocked by how I never knew how wicked awesome comic con culture is.

First of all, holy cosplayers! There were costumes everywhere. Not something you usually see at smaller, literary cons I usually go to. I’m not a costume dork, so the novelty wore off quick for me. But it became clear PDQ that one day wasn’t going to be enough to take in all the amazingness that was happening at Heroes Con.

Smaller literary conventions revolve around panels, programming, and readings. The main focus of HeroesCon though was what other cons call the dealer’s room. Only imagine a dealer’s room that could fill a football stadium, stuffed with shelves of comics that climb toward the heavens, stacks of collectible figurines, and table after table of comic artists and writers, peddling their latest project to the masses.

My feet also felt like they had been stomped on by the Hulk after me and my friend Pat made a few laps around the place. Concrete floors are not kind to foot tendons, or back tendons, and I’ve already made a mental note to arm myself with a bottle of Advil next year.

I was able to give my feet and back a rest by going to a workshop on comic storytelling given by Tom Lyle from SCAD. It really was geared more toward the artists in the room, but it gave me some ideas for how, if I do pursue this growing insanity inside of me to write comic scripts, I can write the script to help my artist tell the best story he or she can.

Besides the workshop, I spent most of my time catching up with friends, and making new ones, all while spending too much money buying people’s stuff. I’ve learned that Bar Con, the gathering of creators at the bar after a long day of conventioning, is worth the hotel-priced beers because of the networking opportunities. I shall certainly be getting a hotel room next year, for Saturday night at the very least.

The comics industry is certainly not as straightforward as the fiction industry. It also is significantly harder for women to break into. And I might just be be high on the vapors wafting off the pages of a trade paperback, but I want to be a part of it.

Now excuse me while I go write another script.