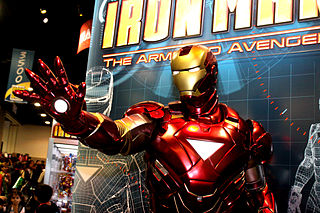 I didn’t have high expectations when I went to see Iron Man 3. After polling my friends, about half really liked it and half just shrugged their shoulders and said, “Eh.”

Now I think I fall squarely in the “Eh” crowd, only I got a little peeved about Pepper Pott’s role in the story.

If you want to shield yourself from spoilers, now’s the time to summon your suit of armor, step inside it, and cut off all connection to the outside world. The ending of this film needs discussing.

Why? Because to me it didn’t have the emotional impact it could have.

To sum it up, the Mandarin, who is the Big Bad in this film, had kidnapped Tony’s girlfriend Pepper and the President of the United States. During the final fight, Tony watches as Pepper’s hand slips from his grasp and she falls several stories into an oil-fueled inferno.

This moment should have been a moment of horror and shock for the viewers just as much as it was for Tony. But the viewers know from an earlier scene that the Madarin injected Pepper with Extremis serum, a drug that makes people both wicked strong and incredibly flame retardant.

So there truly is no surprise that Pepper springs back to life and gives the Mandarin a good drubbing just as Tony is about to get skewered.

Now as much as I appreciate seeing the kickass side of Pepper, not only did the scene lack impact, but it also didn’t quite make up for making Pepper the kidnapped damsel in distress for the second half of the movie. It also really didn’t make up for her wearing little more than a sportsbra and spandex BEFORE she fell into the fire. (I would have accepted her wearing little more than charred underwear when she shows up to save Tony, considering that the fire would have burned her clothes off. But noooooo, lets make Pepper look even more helpless by showing off her abs.)

It also didn’t make up for the letdown I felt about Pepper’s brief screen time wearing Tony’s armor. There was this big to-do about Pepper being in the suit. And I guess it got many of us geek ladies excited about how we might see the heroic side of Pepper just like we did in Matt Fraction’s run on The Invincible Iron Man.

But in the comics, Pepper got her very own armor, and she used it to help Tony save the day. In the film, Tony threw the armor up around Pepper to protect her, then took it right back. Sure, Pepper kept Tony from dying, but I would have rather seen what would have happened if Pepper kept the suit.

I wouldn’t have expected her to wield it as well as Tony, and that could have served the plot well. Perhaps she could have used it to break into AIM to steal information, only to get her inexperienced butt handed to her by the Mandarin’s Extremis-enhanced supersoldiers. A fight, no matter how short or awkward, with Pepper in the suit certainly would have made the whole damsel-in-distress thing a lot more palatable.

Pepper’s role wasn’t the only issue I had with the film. The writers ultimately tried to cram too many gags and minor characters into the script, but I would have forgiven all that if they had gotten Pepper right.

I know that Pepper isn’t the star of the show, but I think that I speak for most fans when I say that the story is always better when Pepper is portrayed as Tony’s equal, motivating him to be a better hero with her wit and intellect rather than a cry for help.