I Want A Cafeteria Back In My Life 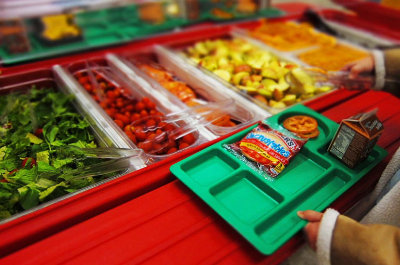 There are fewer things our society attributes more sadness to than eating alone. Our media constantly delivers the message that a meal made for less than two people is social failure packaged in a microwave tray.

I have no problem eating alone. Outside of special occasions, I eat most of my meals in the company of a good book. I have no problem bringing a book instead of a friend to restaurants as well. There’s nothing wrong with solo meals.

But I still miss having a cafeteria.

A cafeteria is an instant community. It may be built around food produced in mass quantities, sometimes of dubious quality, but it is a community nonetheless that many people take for granted when they’re growing up.

Think about it. Yes, there were many things that sucked about being forced to eat with kids you hated in grade school. And the whole territorial popular-kids table thing that typically takes root in middle school is beyond dumb. But around high school, most people begin to explore friendships beyond their traditional social spheres and the cafeteria is not so much a social torture chamber anymore as it is a room of social opportunity.

I imagine that most people experience their golden cafeteria years in college. I certainly did. Even if I had a super-crazy busy day planned, or an organic-chemistry exam looming over my head, I could always count on seeing at least one of my friends for a half hour of shared mastication in the cafeteria (or as we Dickinsonians call it, the Cafe). The Cafe also made juggling different social groups very easy because I could have lunch with housemates, dinner with my frisbee friends, and breakfast with the other crazy science majors who actually got up early enough to eat it before an 8:30 class (all three of us). Sure, we had that middle-school tendency to eat at the same tables every day. But by that point in our lives, I felt it was more about making it easy for us to find each other rather than excluding people.

Now compare this to adult life. Outside of work, there is really no scheduled socialization time for adults that happens on a daily basis. Many people find community by going to church, attending MeetUp groups, or hanging out at the gym. But many adult social events are weekly affairs, you don’t get a chance to get to know people beyond your shared interest in an activity, and often these events require effort in the form of planning or money.

In contrast, the expectations associated with a cafeteria meal are super low. You don’t have to get dressed up. There’s no pressure to show off or perform. If someone skips out, it’s no big deal–the meal isn’t ruined by their absence. Plus, cafeteria food is cheap, or you can bring a bagged lunch, so there isn’t any hand-wringing about money. All you have to do is show up, grab a chair, and be yourself.

We do have a cafeteria at my workplace. I tend to avoid it because it’s not so much a respite from work as it is another opportunity for people to bug you about work. I think a cafeteria at my apartment complex would be more ideal, or a Singapore-style open-air cafeteria complete with cheap beer.

Because that’ll never happen, even if pigs do learn to fly, it looks like I’m gonna have to give the work cafeteria another shot. It’s no Cafe, but maybe it would be an improvement over eating at my desk. Maybe.