This post is probably going to make my favorite high-school English teacher cry.

Or at least subtract a few points from my geek cred-O-meter.

Anyhoo, geeks at science fiction conventions like to throw around shorthand much like kids toss around a whistling Nerf football. You either know the lingo, you ask someone to explain the lingo, or you pretend that you know the lingo while hoping know one notices how confused you look.

That’s what I typically did when the word “meta” came up in conversation. After faking it for a few cons, I told my pride to take a hike and looked it up.

The prefix meta can be tacked onto just about any word, but meta, as people in fandom use it, refers to metafiction. The concept of metafiction largely has to do with acknowledging the author’s existence in a story he or she created. It can be a classic revealing-the-person-behind-the-curtain type of thing, or something more subtle, a bit of dialogue that reveals there is an author out there somewhere who has power over the story, but doesn’t specifically reveal who that person is.

Comics provide some of the best examples of the meta concept. Steven Pastis, creator of Pearls Before Swine, often draws himself into his own comic strips. Brian K. Vaughan and Tony Harris (who I’m not happy with, but I hate to waste an excellent example) also inserted themselves into a chapter of Ex Machina in which Vaughan recalled his September 11 experience with Mayor Mitchell Hundred, the main character of the story. I also took a stab at visual meta. 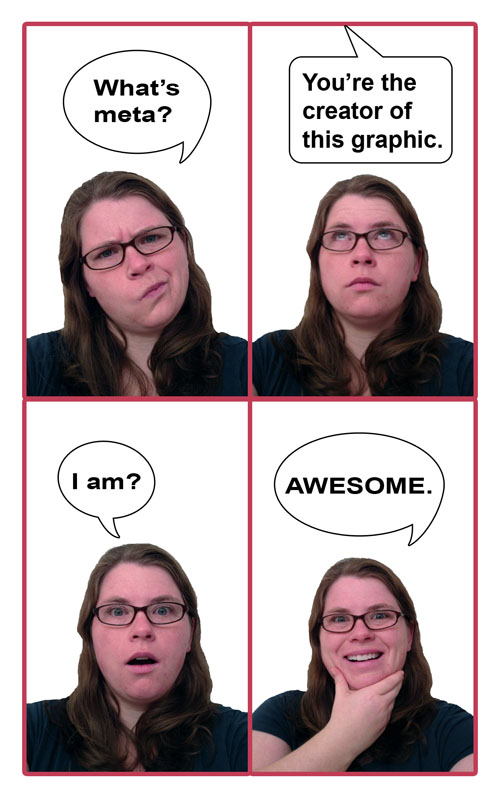 In books, authors across all genres have used meta elements, but for meta to such a common word in fandom though, speculative-fiction authors must have a tendency to use this approach more often than authors in other genres. And it turns out that a fair number of the authors on this incomplete list of metafiction works, which includes Dr. Suess, Stephen King and Peter S. Beagle, are well-known for their speculative fiction.

Meta can ultimately manifest in different ways too. Philip K. Dick wrote himself into Radio Free Albemuth as a major character. John Scalzi wrote a chapter in Red Shirts about the fictional creator of the main plot in the entire book. Susanna Clarke employed meta effectively in Jonathan Strange and Mr. Norrell through the strategic use of footnotes, a technique Terry Pratchett uses often as well in his Discworld series.

My guess is that that most spec-fic authors gravitate to these approaches because it lets them grab their readers’ minds and contort them in ways that a regular story can’t, and by the time the author’s finished, readers have a novel perspective on the story that they never would have had without meta. And where there’s novel perspective, there is always an opportunity for new understanding and growth.

Not all writers intend to warp their readers’ brains, but many aspire to make their readers think. Meta, when employed well, is pretty much guaranteed to make people think, as long as people have the patience for it.

I doubt I’ll attempt meta in my stories any time soon. But at least now I won’t have to fake understanding at cons anymore. At least until geek shorthand evolves again. Sigh.