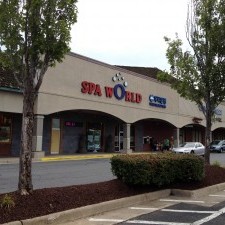 There are few better examples of Asian Awesome than Spaworld. So pardon me if I take a few moments to gush about it during my first full day off from work.

Tucked away in a shopping center in Virginia, this place kinda looks like a swimming-pool superstore on the outside. But inside is an oasis of relaxation, complete with seven scented saunas, a ginormous pool filled with massaging jets, and food that makes you wonder whether you’ve been teleported to Korea.

And guess how much this all costs?

Spaworld follows the principles of a jjimjilbang, a Korean-style bathhouse. Americans might find some things about Spaworld a little weird; like having to wear uniforms in the common areas, or the fact that the place being open 24/7. And other things Americans might find downright uncomfortable, such as the undress code for the sex-segregated pool area (that’s right folks, everyone’s walking around nekkid). But I ultimately feel that most people would get over those hangups once they realize the super-tension-eliminating powers of Spaworld.

Today, I’ve already spent a good hour in the bade pool, blasting away my back pain with jets so strong, they make your average hot tub seem like a kiddie pool. Then I spent a good hour going through the saunas, my favorite being the red clay ball room. It’s like ball pit for adults, filled with in tiny heated balls of red clay that you can bury yourself in.

I also took the time to learn the towel wrap fashion that is all the rage at Spaworld.

If this isn’t the dorkiest photo on Earth,
I don’t know what is.

I shed my Princess Leia get-up before going to the restaurant, where I always get the hard baked eggs and the spicy beef soup. For dessert, they make an assortment of smoothies, and for the really adventurous, they have red bean shaved ice. The food costs extra, but it’s totally worth it, and I always leave swearing that I’m going to sign up for lessons at an Asian cooking school.

My only (minor) criticism is that I wish this place had more natural light. Some skylights would make the common room seem a little less artificial. But they would also probably disrupt the delightful disconnection you get from spending time here. Just like a casino, you’ll be hard-pressed to find a clock in Spaworld.

Other than that, I have nothing but respect for Spaworld. If other spas were just as affordable and family friendly, maybe our country would be a little less neurotic. I hope the owners decide to expand to other locations.