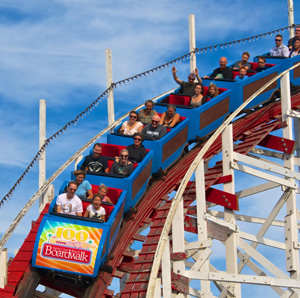 Many people like to use a roller coaster metaphor when they’re talking about life. One of the problems I’ve always had with that metaphor is that roller coasters have chains that pull them up hills. In life, there really isn’t anything or anyone who can yank you up a hill but yourself. There may be things that are out of your control, yet that doesn’t change the fact that the only one who can power the climb up that hill is you.

The part of the metaphor I do like though is the idea of letting go at the top of the hill and just seeing where the tracks take you.

Because from time to time, I like to coast. And by coast, I mean focus on a couple important things and let other things go for a while. Things being stuff like cooking my own meals, cleaning, folding laundry, wearing a bra with underwire, or replacing the soon-to-be expired license plate on my car.

When I coast, there is generally something else in my life that most of my energy is being dedicated to. Right now that energy has been dedicated to getting myself on a regular exercise schedule. Master’s Swim is awesome, and I always leave practice feeling good, but I am also very tired. It always takes my body a little while to adjust to physical activity. So instead of writing in the morning like I should be, I’ve been watching re-runs of The West Wing.

I could claim that I’m watching it so that I can absorb Aaron Sorkin’s ability to craft brilliant dialogue via oversaturation. Honestly, it wouldn’t surprise me if my dialogue took a Sorkinish turn over the next week or so. But my watching stems largely out of being too tired to think in the morning.

That is changing, fortunately  and I feel that this is the week to get back to work. I have a novel to write after all, and I have to write an average of 1,400 words a day to make my goal for Camp NaNoWriMo. Considering that’s about how much I had to write every single day for NaNo in November, I think it’s still feasible. Plus I don’t have anything else major scheduled for the weekends for the rest of the month. (This past weekend was my choir festival, which was fun but more exhausting than Master’s Swim. Seriously. You try singing for twelve hours straight and tell me it’s not tiring.)

Yup, coasting’s done. Time to pull myself back up the hill. It’s big, but the climb will definitely be worth it.